High Level Conference on the Future of Medicines: Compilation 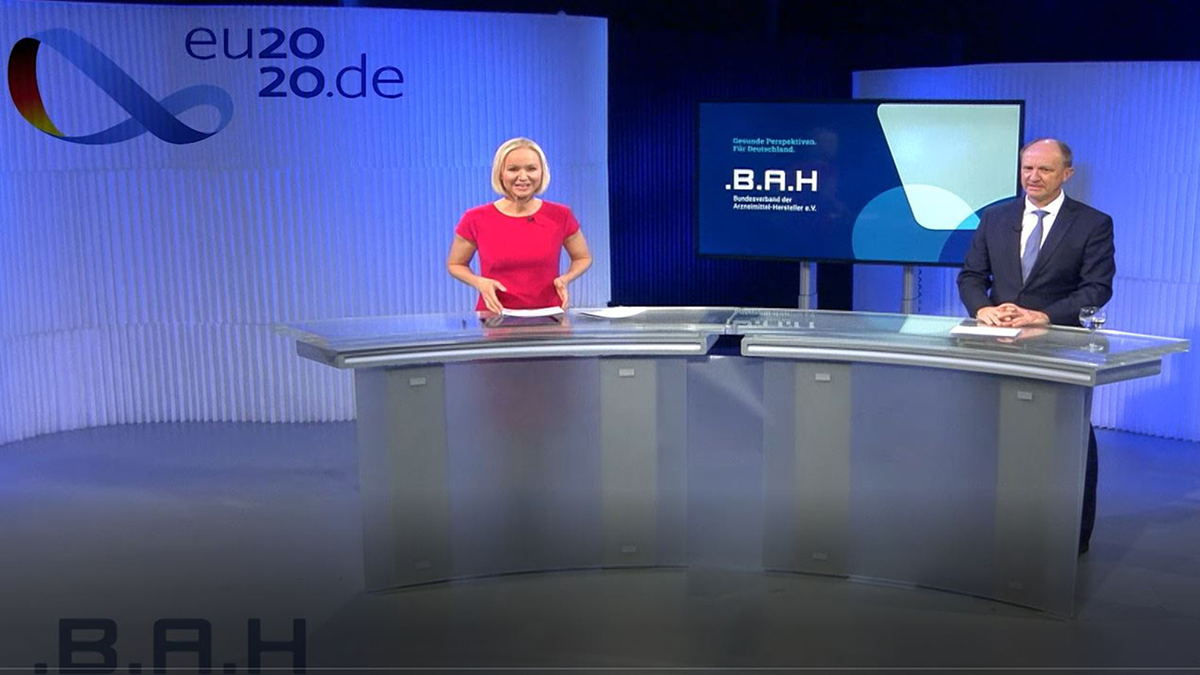 The German EU Council presidency, which starts on 1 July 2020, is taking place in changed circumstances. With the Corona pandemic, important topics from the field of medicines became visible, with a requirement for action on a European level. Some of them have not been in the focus of attention up to now.

Whereas, for example, digitization had been planned from the outset as a focal point of the Council presidency in the 2nd half of 2020, the new situation demands giving more attention to subjects like strengthening Europe as a production location or optimisation of regulations.

On the occasion of the German Council presidency, the BAH is holding a "High Level Conference on the Future of Medicines" from 30 November until 1 December 2020. The BAH is organizing the conference in Berlin in cooperation with the Heads of EU Medicines Agencies, HMA, and BAH's European umbrella organisation, the AESGP. The topics are the lessons to be learned from the Corona pandemic for the European Community and the preconditions which politics must create for secure supplies of medicines.

One of the dominating subjects during the German Council presidency will doubtless be a reduction of supply bottlenecks in medicines.

[glossar] Strengthening of Europe as a production location by regulatory facilitations :::

Especially the reduction of the EU's dependence on medicines and active substances from third countries will be a focus of the German EU Council presidency. The retrieval of production is right on top of the agenda, so that supply bottlenecks can be prevented in the future. The issue is complex and needs to be approached macroeconomically and in international contexts. We believe that the debate must start earlier; the production still located in Europe must not migrate any further. It is therefore necessary to create an appropriate business environment for companies that want to produce in Europe.

Open borders as an important precondition for production of medicines must also be mentioned here. [/glossar]

The measures stated here also guarantee investments in Europe in future and maintenance of a highly capable industry, which has a high interest in extensive provisions. Supply bottlenecks can then be minimised independent of the Corona pandemic with simultaneous assurance of quality, effectivity and security of the medicines in the EU.

Manufacturers of medicines and medical devices are indispensable for the health and security of the population and thus for the services of general interest – they are system-relevant. [/glossar]

HTA means health technology assessment. It is a question of the planned pan-European assessment of the benefits of new medicines and medical devices. Re-inclusion of the subject in the working programme of the German EU Council presidency would be approved by BAH.

The German EU Council presidency offers the almost unique opportunity of establishing a Europe-wide standard assessment of the benefits, providing many advantages for all patients within the European Union. The Coronavirus Pandemic especially has proven the EU-HTA’s significance. With a regulation at hand, a much faster and more efficient exchange of information, e.g. concerning treatment options, diagnostic kits and protective equipment, would have been possible. [/glossar]

[glossar] Digitization in the health area :::

The German EU Council presidency offers the particular chance to create a "European Health Data Space", which serves the exchange of health data and thus supports research. With a view to certification of products of artificial intelligence, new possibilities of regulatory handling are to be considered. Digitization of the health area is an important matter for BAH. [/glossar]

[glossar] Make use of the postponement of the new Medical Devices Regulation :::

The start of validity of the new European Medical Devices Regulation has been postponed by 12 months due to the Corona pandemic. The new timeframe opens up the possibility of remedying further deficits which exist. Establishment of sufficient capacities with the notified bodies is of particular importance. In addition, there are further points such as publication of the necessary secondary legal acts, adoption of the guidelines and prompt introduction of the EUDAMED database. [/glossar]

Herbal medicines are effective and safe. Appreciation for herbal medicines should be strengthened by matching initiatives of the German Council presidency. In this context, we would mention legally binding translation of the Health Claims Regulation 1924/2006 for botanicals. This provides for food manufacturers only being allowed to use nutrition and health-related statements ("health claims") about foodstuffs if they have been stated on a verified positive list of the EU. [/glossar]

The subject of the Brexit will continue to concern the manufacturers of medicines intensively. They are staking on practicable rules for a secure supply of medicines being agreed between the European Union and the United Kingdom – for example an extensive mutual recognition treaty of certificates for the manufacture and approval of medicines as well as further-reaching regulations on the import and export of ready-to-use drugs, active substances and excipients. [/glossar]